In one of my classes last fall, we learned a lot about toxic masculinity in fairytales. One story that we read was Carmen Machado’s “The Husband Stitch.”

Toxic masculinity is a theme that we dissected in class—a theme that was all too familiar to me but nameless until this point.

The concept of toxic masculinity is an interesting one because it approaches and connects several different gender issues that we face everyday.

Let’s peel back some of the layers on this complex concept. 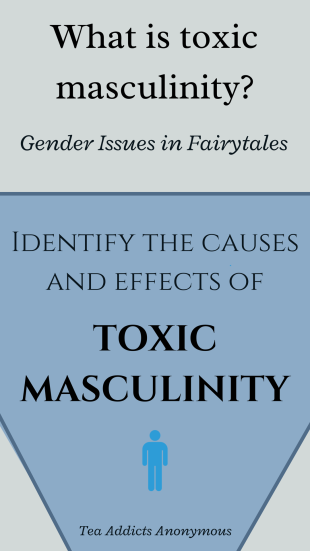 In a world where “boys will be boys” and victims are liars, it is no surprise that there is little scientific information on the internet relating to the husband stitch other than a Wikipedia page, some blog posts, and forums.

The “husband stitch” is an extra suture added to a cut or torn vagina after a woman gives birth naturally. It is intended to make postpartum sex more pleasurable for fathers. While many people believe that this is just an old wives tale, women are speaking up about the complications that they faced due to the stitch that tightened up their vaginas at the will of their significant others while they were half-conscious after delivering their children.

In her short story, “The Husband Stitch,” Carmen Machado addresses the infamous extra suture and sheds light on the fact that even during their most powerful, life bearing moments, women are extremely vulnerable due to toxic masculinity and harmful gender roles.

The biological differences between males and females are not much greater than genitals and some hormones. Most of the differences between men and women are socially constructed. This social construct has spent centuries in the making. Masculinity and femininity are traits that are forced upon humans from the moment that their gender is assigned to them.

While expecting parents may think it is cute to throw a party to reveal whether they are having a football player or a ballerina, they are actually the first enablers of harmful gender roles. Little boys are conditioned to be strong, dominant, and even violent, while little girls are conditioned to be docile, submissive, and pretty.

The worth of boys and girls are measured differently which is why it is difficult for them to be valued equally. This divide is not only caused by toxic masculinity, but it perpetuates toxic masculinity. According to Clemens, “The phrase is derived from studies that focus on violent behavior perpetrated by men, and—this is key—is designed to describe not masculinity itself, but a form of gendered behavior that results when expectations of ‘what it means to be a man’ go wrong.“

Gender issues are a growing topic in the media but are rarely discussed in terms of the underlying issues. Toxic masculinity is defined as follows:

Toxic masculinity is a narrow and repressive description of manhood, designating manhood as defined by violence, sex, status and aggression. It’s the cultural ideal of manliness, where strength is everything while emotions are a weakness; where sex and brutality are yardsticks by which men are measured, while supposedly “feminine” traits—which can range from emotional vulnerability to simply not being hypersexual—are the means by which your status as “man” can be taken away.

The mistreatment towards and preconceived notions about women are not brought about by lesser inherent value of women, but by the sense of insecurity that has been embedded in men by the societal pressure to be masculine. Men are trained to believe that they are more powerful than women which gives them a sense of entitlement over the minds and bodies of their female counterparts.

Since this sense of entitlement has been ingrained in society, men get away with anything from an extra stitch to rape. Clemens stresses the importance of remembering that “discussing toxic masculinity is not saying men are bad or evil, and the term is NOT an assertion that men are naturally violent.” It is often discussed to better understand the root of harmful gender roles imposed upon women.

From the first lines of the story, the narrator of “The Husband Stitch” sets the tone by instructing her audience to read the words of each characters in particular tones. She says to imagine her voice “as a child, high-pitched, forgettable; as a woman, the same” and her husband’s to be “robust with his own good fortune.” She describes the other women and men to have tones like hers and her husband’s, respectively.

In very few words, she speaks directly to women who have been made smaller by the male figures in their lives. She describes herself as a dainty, “forgettable” woman with specific adjectives, but does need to use powerful diction to encompass the tone of the father or husband because it is implied by their gender alone. This first passage sets the scene for the entire story.

In “Stitching Feminism And Fairytale,” Kate Jones’s analysis of “The Husband Stitch,” she points out the narrator’s awareness of her sexual deviation. The narrator tells the story of the moment that she first laid eyes on the man who becomes her husband and acknowledges that she wants him. She lists her physical features that could win over this man and mentions that it would defy custom to make sexual advances on the man. She pauses in her thoughts to address a story she once heard about a woman who was institutionalized because of a sexual favor she requested from her lover. The narrator asks, “What magical thing could you want so badly that they take you away from the known world for wanting it?”

This passage implies that sexual desires are only filthy when felt by women. The narrator may believe that this branding of filth and impurity “may be a price to pay for this freedom” to fulfil her sexual desires. The shame that women feel in relation to their sexuality is a reflection of toxic masculinity. The only way for men to feel powerful and manly is to seize power from women, and taking ownership of women and their sexuality is how men have accomplished this for centuries.

Even though the narrator has somewhat embraced her sexuality, her body is not truly hers. She goes on to marry the man from the party, but she has one part of her body that she tries to keep private from her husband: a green ribbon around her neck.

The purpose of the ribbon is unknown until the end of the story. The ribbon is “the private, interior knowledge that all women share; a burden of the body that also binds women together; and a fatal weakness of sorts.” Her husband questions the ribbon incessantly because it is the one part of her that he cannot have access to. At one point in the story, the husband massages the ribbon with an animal-like desire as his wife begs him not to touch it. After a bit of pleading from the narrator, he stops fondling the bow.

This scene, which takes place moments after the narrator reveals to her husband that she is with child, is representative of the sense of entitlement that men feel towards women’s bodies. He forcefully restrains her while he taunts her by stroking her ribbon.

Later in the story, her son often touches the ribbon with a sense of innocent curiosity. She says, “He thinks of it as a part of me, and he treats it no differently than he would an ear or finger.” As the boy grows up and begins to fill the masculine role that society has laid out for him, his curiosity morphs into a greed driven desire to dominate this female in his life.

Between the two major power struggles of the husband and son with the narrator lies a key scene in the story: the birth of the son. When the narrator is in labor, the doctor worries that a cesarean birth may be necessary to safely remove the baby. The doctor jokes that this option may be better for everybody involved. The narrator believes that she sees the doctor wink at her husband, suggesting that he is sparing the destruction of the vagina to ensure that the postpartum sexual intercouse is as satisfying for him as it was before.

The narrator eventually gives birth vaginally with the help of a surgical cut. As the doctor mends the injury after the birth, the narrator’s husband turns to him and asks, “How much to get that extra stitch?”  The narrator cries as she slips out of consciousness. In her analysis of the “The Husband Stitch,” Jane Dykema remarks:

The helplessness of the woman, her body being altered without her consent by two people she has to trust: her partner, her doctor. The details of the third-hand account imprinted into my memory so vividly that the memory of the story feels now almost like my own memory.

Once she regains consciousness, the doctor tells her that she is “all sewn up” and tells her not to worry because her vagina is “nice and tight, everyone’s happy.” He has gone against her will and given her the husband stitch. The narrator has just given birth to another human, something neither man has the power to do, yet she lies powerless at the hands of these two men.

By the end of the story, the narrator becomes worn down by her husband’s unending desire to explore the ribbon. One night, she awakens to him touching the ribbon in a sexual manner. She asks if he would like to untie the ribbon and he eagerly accepts the offer. He nervously unties the bow and the narrator’s head tumbles off of her neck and onto the floor.

The ribbon was holding the narrator’s head to her body. When she granted her husband access to her one private part, her life is ended. She reminds him that she loves him and a gasped “no” escapes his lips.  Her last thoughts are “I feel as lonely as I have ever been.” Although he may feel regret and sorrow, his greed has taken everything from her. The author does not place an emphasis on his reaction to his wife’s death because he is not the victim.

Machado’s “The Husband Stitch” exemplifies how toxic masculinity and gender roles lead to the pain and destruction of women. Perhaps one day serious issues, such as women being tightly stitched for their significant others’ sexual pleasure, will be more commonly addressed and gender will not be a determinant of inequality.

Acknowledging Toxic Masculinity in Our Lives

Toxic masculinity is probably present in your life whether you’re aware of it or not. It may seem insignificant. But when you tell a little boy that he can’t play with the kitchen set or another “girl toy,” or you tell a high schooler that he “throws like a girl” because he made a bad throw, you’re perpetuating it.

Forcing boys to reflect this strength and “manliness” and make themselves bigger and better than their female counterparts breeds a culture of disrespect and aggression. It doesn’t make them stronger.

How does your behavior feed to or fix the culture built by toxic masculinity?

For more work by Carmen Maria Machado, buy her book Her Body and Other Parties today!