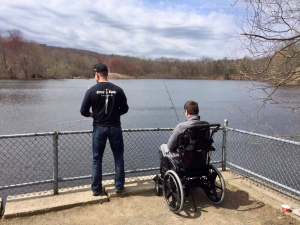 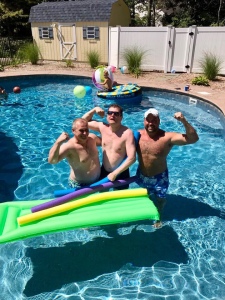 In March of 2016, I was sitting in theology class and got a text from my dad that said, “Mark was in an accident. No details on the severity yet.”

Let me add some context to this.  If we are friends in real life, you have either heard me talk about Mark, whether it be about his accident or the crazy fun times we had when he came to visit us.  Mark had been best friends with my dad since they were in high school, so Mark was more of an uncle to me than anything else.

When I got the text, I was shocked but did not think too far into it, since if it was serious, my dad probably would have told me to call him or come home.  I was not too worried.  The next day, we found out that Mark was in the hospital, but still did not know the severity.  Later in the day, my aunt forwarded a news article to my dad that said that Mark had died in a horrible freak accident.  They were able to find contact information for Mark’s family so that my dad could speak with them to see what was going on.

We found out that the news report was wrong, and Mark was not dead, but in a coma with next to no brain activity.  His chances of survival were slim.  He had minor injuries to his body but severe brain trauma.

When I say that he was in a freak accident, I mean a total freak accident that was the result of being in wrong place at the wrong time.  Mark had just cooked a bunch of fish and was in route to take it to his sister’s house for a family lunch on a nice Sunday afternoon.  He was driving on a divided highway when the tire from the back of a large truck (that was driving in the opposite direction on the other side of the highway) flew off and went through his windshield and hit him straight in the head.

As I mentioned, he was not expected to make it out of the coma.  His family was preparing to let him go, so my dad flew up north to say goodbye to his best friend for the last time.

After two weeks in the coma, Mark moved his fingers as his parents sat near his bedside.  They alerted the doctor and he told them that they were being very hopeful, and their minds were playing tricks on him.  A little while later, he began to flutter his eyes.  The doctor witnessed this, too.  He was far from conscious, but he was showing very promising signs.  They began to run tests and the results showed that he had feeling in all limbs.  Not only did this show that he may have another chance at life, but that he might not be completely paralyzed.

The journey ahead was going to be a rough one, but his family and friends were ready to fight alongside him.  He was taken into surgeries that had been put off because they did not think that he would make it.  He did very well and was soon moved out of the ICU.  After he was out of the hospital, he was taken to the best rehab facilities in his area.  He was in a few different places over the next few months that prepared him to be more and more independent each time, until finally he was able to move back into his own home with a live-in aide.

Due to the injuries suffered in the accident and the extended period in the coma, Mark was unable to move much.  When I first visited him three months after the accident, his brain still struggled to make his fingers move.  He could not show much emotion and he was very, very scared and confused.  He did not seem very hopeful.  He recognized all of us but did not remember a lot of details.  He kept saying that he would never walk again, which was concerning because his body had the ability to learn how to walk again but could only truly be driven by his own determination.  We were just grateful that he was alive.

By the next time I visited eight months after the accident, he was looking much better.  He had gained a lot of the weight he had lost.  He smiled and showed lots of emotion.  He was much more with it and was proud of the things he has accomplished in therapy.  The determine to walk again was there, but he needed one more surgery to correct an effect that was caused by his left foot being still for so long.  We were so proud of the progress that he had made.

The most recent time I saw him, twenty months after the accident, was simply incredible. He had begun to walk on the treadmill with minimal support.  His spirits were high.  He has regained his great personality and sense of humor.  His memory is coming back, slowly but surely.

Although I rarely have the chance to visit him since he lives in Connecticut and we live in Florida, we keep in contact via Facetime and text.  He gives us updates on his therapy and how the walking is going.  He remembers more and more each time we talk.  It is nice because we always talk about fond memories with him in order to help him make connections with the past.

Mark has made leaps and bounds in the past two years since his accident, but there is one issue that he still faces: the financial burden.  Mark lived comfortably before his accident, but even with the money from the insurance companies, his finances were nearly exhausted in a very short time because of his medical expenses.  We all want him to continue to receive the best care possible.

Mark’s family has set up a fund that will help him to be able to keep his house, around the clock care, and the best therapy services.  It would mean the world to my family if you would consider donating even small amount using this link:

Please pray for Mark’s continuous recovery. Mark’s life is a miracle and has been the answer to so many of our prayers.  Also, please consider sharing this post, because we would love to share Mark’s story to help him to gain support.

If you would like to donate money in a different form (cash, check, Venmo, Cashapp, etc.) or get involved in upcoming fundraiser events that we will be hosting, please feel free to contact me at emilykrings10@gmail.com. 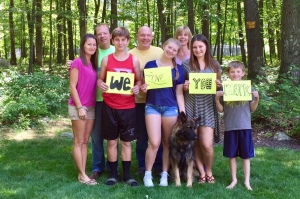