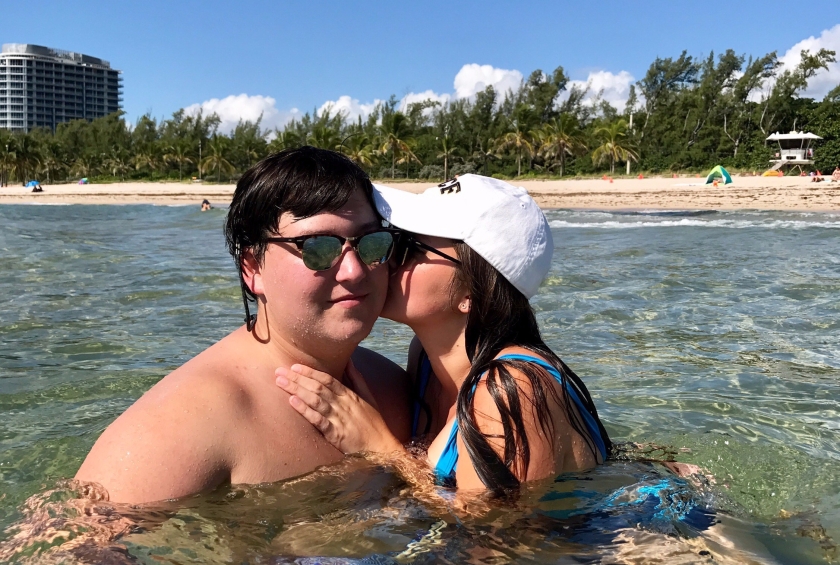 My boyfriend is an awkward guy.  We sat next to each other in at least 8 classes over the course of 2 years before he would say more than a word to me when I tried to start conversations with him.  By 8 classes, I do not mean 8 occasions.  I mean 8 multiplied by 180 days of school, give or take a few days.

I am a talkative girl and he claims that he thought I was weird or intimidating or something.  It wasn’t until we had made some mutual friends and had done some school projects together until he actually started to talk to me.  One of his good friends constantly pushed him to ask me out but he had just gotten out of a relationship and had no interest in talking to me and why in the world would I want to go out with this guy who barely muttered a word when I spoke to him?

We eventually became friends in our anatomy class because I switched seats with the girl who sat next to him so she could sit by her friend and I forced my friendship upon him.  Over the next year and a half, we became really good friends.  I even went on a trip to Disney with his family over 6 months before we even started dating.

At some point at the end of our senior year of high school we transitioned from being really good friends to a confusing stage of “wait…we could be more??”

We went on a couple dates over the next few weeks and hung out almost constantly.  One day, we went to a class party and got a little too crazy.  The night ended in me asking my mom if he was my boyfriend a million times over…without realizing that he was in the same room.

A couple days later, he told me that he was taking me on a surprise date and the only thing I needed to do was look nice and be ready when he was there to pick me up.  I did not know it then but the date he took me on was going to be the most memorable date of my life.

So the date and time comes and he picks me up.  He told me not to look at his phone because the GPS was telling us where we were going and he wanted it to be a surprise until we got there.

We pull up to a very nice Italian restaurant on Las Olas Blvd. which was super exciting to me because I LOVE Italian food.  We get seated and handed our menus.  We browse the menu then look up at each other with a face of panic.  The menu was ENTIRELY IN ITALIAN and neither of us knew a word of Italian.  One of us remembered that the waitress mentioned something about pizza and meatballs so that’s what we ordered.

We ate the pizza and meatballs (and lots of bread).  When it was time to leave, he told me that he had another surprise for me.  He took me to my favorite place: the beach!

We headed to the beach, parked the car, and headed out for a walk.  Soon after we got out of the car we ran into our second “panic” situation of the night: two homeless men were fighting right in front of us.

The men were fighting over a backpack.  The larger man threw the smaller man’s backpack into the street.  After throwing the poor guy’s backpack, the larger guy started to get physical with some pushing and shoving.  We walked the other way to avoid the situation when we heard a woman screaming.

The woman began to scream, “HE JUST STABBED THE GUY! THIS MAN HAS A KNIFE! HE IS RUNNING! SOMEBODY CALL AN AMBULANCE!”

The boyfriend shielded me from the chaos in an attempt to “preserve the mood” (that had already been destroyed).  The man who had stabbed the other ran into the dark near the ocean and was unable to be found, which gave us a not-so-warm-and-cuddly feeling.  We both got super nervous and ended the walk on the beach within ten minutes of arriving.

On our way home, we passed by our Senior Prom venue.  We had gone to prom just a few weeks earlier, where he was accompanied by one of our good friends (which is a funny story for another time).  He made a comment about how he wished he had taken me.  He pulled a bouquet of flowers from the back of the car and told me that he did not have a corsage for me but the hoped the flowers would do.  I laughed and thanked him for the flowers.

A few miles down the road, I gave him wrong directions and got us lost.  As we were backtracking and trying to find our way, we got stuck at a very long stop light.  He turned to me and said, “Emily, the real reason I got the flowers was because I was, uh, kinda hoping you’d want to be my girlfriend…like make this official.”

Of course, I told him that I would love to be his girlfriend.

We ended the night with a nice Mint Majesty tea from Starbucks before he dropped me off at my house.  My family was very surprised that a boy not only wanted to be with me, but also was nice enough to buy me flowers.

Luckily this date that did not go at all as planned was not a sign of a messy and violent relationship.  We have gone nearly a year and a half without witnessing any more acts of violence between homeless men.  I would not have wanted that date to go any other way…except maybe I would spare the homeless man of his stab wounds.